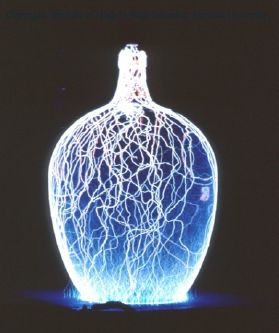 Protection of a building according to the standard procedure is not a guarantee that the building will be 100% protected from lightning flashes. Lightning protection standards take into account the average features of lightning flashes but there are also many atypical factors that are not taken into account. These factors may, from time to time, lead to the failure of the lightning protection systems leading to severe accidents. The goal of this project is to come up with better procedures to evaluate and design the lightning protection of sensitive buildings such as storage tanks, nuclear power stations and strategic electrical systems in order to avoid severe accidents.

The sprites and blue jets are electrical discharges that take place in the upper atmosphere where the pressure is a fraction of that at ground level. These ionospheric discharges are created by the rapid change in electric field caused by lightning flashes. Electric fields having these features can be created in the high voltage laboratory at Uppsala University. The main goal of this part of the research project is to perform a thorough study of the impulse breakdown characteristics of air at low pressures by combining electrical measurements with optical radiation measurements and high speed photography.

Production of X-rays in electrical discharges

Recent discovery of X-ray bursts generated by thunderstorms and lightning flashes has resulted in a flux of scientific papers on the nature of physical processes that could be active in generating X-rays from lightning flashes. Two theories have been advanced to explain the source of these X-rays. The first one is due to the Nobel Prize laureate; C. R. T. Wilson who suggested that conventional breakdown can generate high energetic electrons that through bremsstrahlung give rise to X-rays. The other theory is based on the runaway electron hypothesis in which it is assumed that MeV electrons generated by cosmic rays are accelerated in the thunderstorm electric fields to very high energies again leading to X-rays. This research project aims to quantify, both in time and energy, the X-ray production in laboratory discharges both in air and in other gases at different pressures. The results to be gathered will have important implications not only for physics of electrical discharges and lightning but also for the fundamental process of the runaway breakdown of air, in which electrons are accelerated to very high energies in strong electric fields.