Marine currents in rivers, straights and the oceans constitute a renewable energy source with good potential. At Uppsala University, research is primarily focused on the generators of marine current energy converters. The goal is to have a power plants that generate electricity with high efficiency at slow water movement.

In March 2007, the first prototype generator adapted to these low velocities was completed at the Ångström Laboratory. 2013 the first experimental facility was launched at Soderfors in the Dal river. The next step in the research is to connect the power plants to the grid and to develop and scale up the technology so that it is suitable for tidal applications. 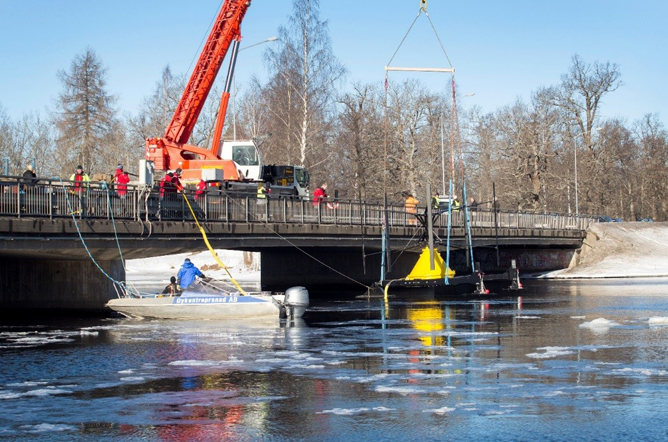 We deployed the first marine current power plant in the river Dal outside Söderfors 2013. The purpose of the project is to run a small-size experimental station for marine currents in realistic settings.

Research on the interaction between fish and turbines

In 2015 initial test fishing was done in order to investigate the common fish community in the waters. In 2017 experimental studies were started. Smaller salmon and trout (smolt) was released in the waters around the turbine. With the help of sonar recordings fish behaviour was documented including rotating and still (control) turbine conditions. This study will continue during 2018. In 2018 an experimental laboratory study will be started using the facilities of Swedish Univ. of Agricultural Science in nearby Älvkarleby. In their brook aquarium smolt behaviour around turbines will be tested using turbine models. With the focus on different turbine models, varying rotation speeds, velocities and light regimes aiming to finding the tidal/current stream concept and technologies with the least environmental impact.